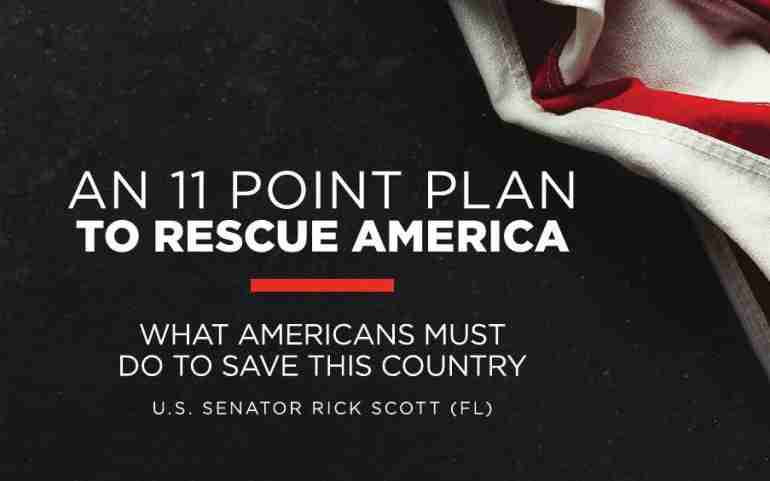 Senator Scott’s  11-Point Plan To ‘Rescue America is exactly the kind of pragmatic and dynamic action plan that we will support if elected.  When I say that changes must be made, this is what I mean.   We must change the status quo, NOW, while we still can!!!

Republican Florida Sen. Rick Scott has created an 11-point plan with 128 specific ideas to “rescue America,” which he believes should be the focus of the GOP’s agenda moving into the midterms.

The Daily Caller obtained a copy of Scott’s plan and spoke with the current National Republican Senatorial Committee (NRSC) Chairman about his ideas for the party. As a businessman, Scott said he would need to explain his goals in order to receive funding or support and compared it to his job as a Senator, saying he could not raise money without a specific plan. He mentioned that if he expects people to vote for him then he has to give people a reason to vote for him.

Scott said he believes the elections will mostly be focused on how bad President Joe Biden’s first term in office has been but added that, since he is running for Senate reelection in 2024, Scott wants people to know what he will be focusing on. The Florida Republican also said that he knows a number of other Republicans who will put out plans with different ideas. According to Scott, House Minority Leader Kevin McCarthy has a similar plan and said he imagines former House Speaker Newt Gingrich would be putting out a plan at some point.

Here Are The 11-Points In The Plan:

Here Are Scott’s Points Of Focus:

“I think the way you do it is you educate Americans on where things are made. We all try to do it. I’m sure you try to do things locally. But, you’ve got to have an option and you’ve got to know it. So, I think it’s important to decouple from China. I think their government just lies, cheats and steals. I think they’re part of killing 100,000 Americans last year with fentanyl, and I think it’s past time for us to say this idea that they were going to change and get better is just not realistic. So, let’s educate Americans,” he added.

On the point of ending “foolish soft-on-crime policies,” Scott explained the only way to get rid of liberal state and district attorneys is by getting involved in elections. “Elections matter,” he said. “We’ve got to go win those elections.” He also mentioned when he was governor of Florida he had the authority to take away the cases of a liberal state attorney.

“So, everybody that’s in office, use whatever authority you have to make sure these people are complying with the law. And I tell people, if the law is such that we’re not going to have that crime, then that’s the legislature’s job. It’s not a prosecutor making those decisions. So, we’ve got to get involved. And I think it’s going to happen this year with school board elections and all across this country, and I think it’s going to happen with state attorney elections,” he said.

The Daily Caller asked what Scott’s goal was with this plan, to which he said: “My goal is to create a conversation about who are Republicans? Why should you elect us? When I was in business and I didn’t have a plan, I couldn’t raise money. I think it’s the same with this. If I expect you to vote for me, then I’m going to have to give you a reason to vote for me.”

In November, Scott laid out key Senate races to watch for the 2022 midterms as the GOP tries to regain a majority in the upper chamber. On Monday, Scott mentioned in his capacity as NRSC chairman, he will do everything he can to get Republicans re-elected, and said they have an opportunity to pick up seats. He also mentioned how Democrats are hurting themselves, which is helping Republicans in the polls.

“But on the other side, Warnock and Kelly are raising money. Schumer is already running ads against Laxalt and helping Cortez Masto. Hassan has money and she’s trying to improve her position. The polls are great, but the polls don’t win elections. If polls won elections, I would not be here because every poll said that I would lose. So, we’ve got to go run good races,” Scott said.

The 11-point plan will be available on RescueAmerica.com, and Scott said he believes his plan will help get the country out of the “deep trouble” it is in.

“My goal is to get a conversation going about how we’re going to rescue this country. We’ve got to rescue this country, and this country is in deep trouble. Thirty trillion dollars worth of debt; crime out the wazoo; our kids being indoctrinated with critical race theory; our military becoming woke. I mean, you look at this stuff. Our border completely open. Our military having to withdraw. We need to start showing up and say what we’re for,” Scott added.

Gingrich endorsed his 11-point plan, telling the Daily Caller: “Rick Scott’s Rescue America Plan is a very important contribution toward a positive, problem solving Republican Party. Like the Contract with America, it will help win the election and also, even more importantly, serve as a blue print for the new Republican majority to focus on solving problems and creating a dramatically better American future.”

“It is a very important step toward getting America back on track toward a more prosperous, freer and safer future,” Gingrich added.

“Joe Biden and Democrats have made life more expensive and less safe for families across America. Republicans like Senator Rick Scott have real solutions to put us back on track. From lowering costs and creating jobs, to supporting police and securing the border, Republicans are offering a clear plan to protect and reinvigorate the America we know and love,” McDaniel said.